After years of tireless organizing to expand the California Earned Income Tax Credit (CalEITC) to income-eligible workers; ALL immigrant tax filers are now included. Follow us as we share the greatest hits from the CalEITC Coalition in our way to make it for all.

In June 2015, CA approved its first statewide income tax credit, the CalEITC, to put more money back into the pockets of CA’s working families and individuals. From this, CalEITC4Me and the CalEITC Coalition would be born.

Here, UWCA CEO Peter Manzo and former Policy Director Judy Darnell join Bryan Ha in attending the first ever conference held for CalEITC by Socal Grantmakers in December 2015. This would be the start of UWCA’s involvement with the coalition.

In May 2016, the Public Policy Institute of California (PPIC) released an important research paper highlighting the growing levels of income inequality in CA. This troubling trend would lead to the first calls to expand the CalEITC so that MORE working families could stay afloat financially.

Impact of the CalEITC

In another report released by the PPIC  it was found that the CalEITC played a tremendous impact in keeping hundreds of thousands of families from living in poverty. 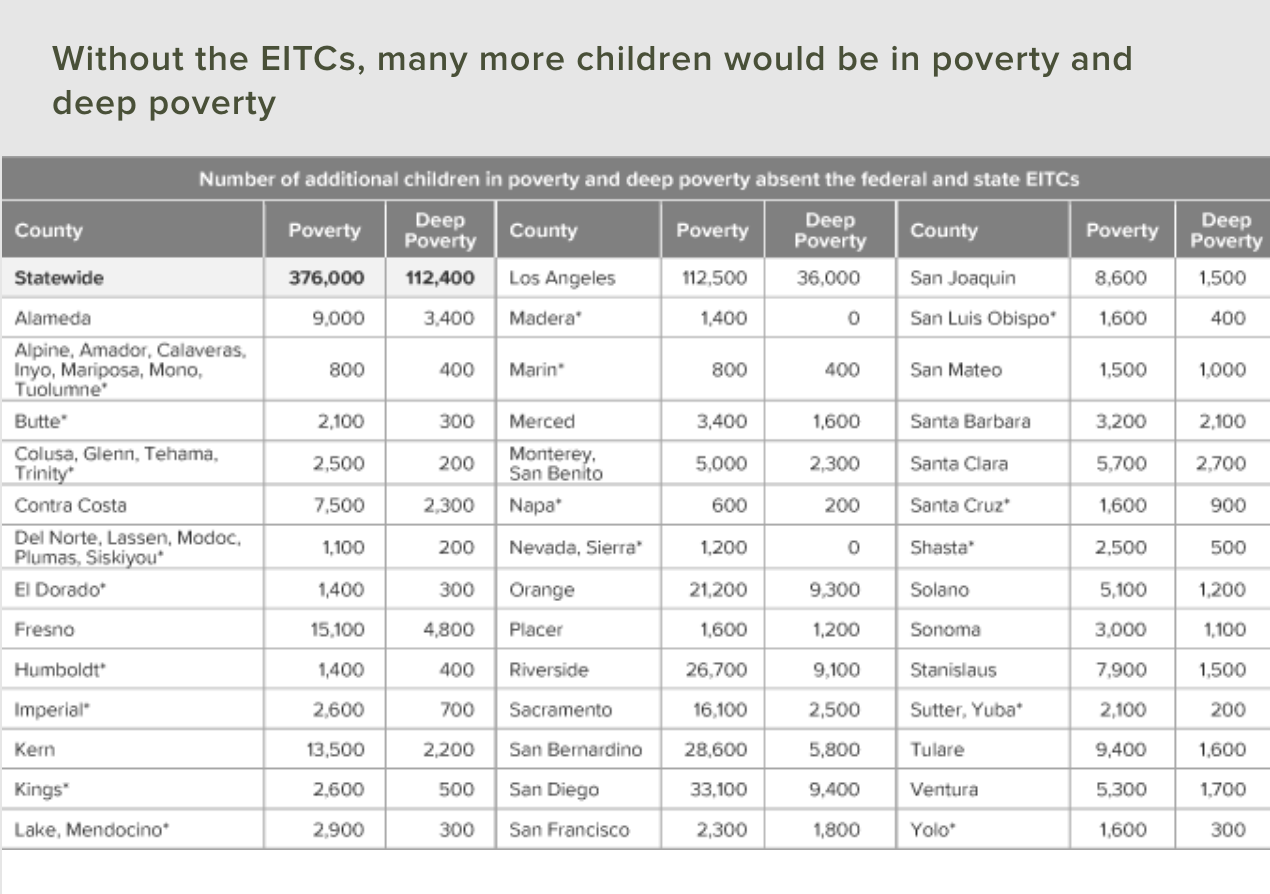 Fast forward to 2017, SB 106 expanded the CalEITC for the first time to include the self-employed and parents working full-time at the minimum wage. As highlighted by Alissa Anderson with the California Budget and Policy Center, this made an additional 1 million filers eligible for the credit.

That same year, the Franchise Tax Board releases a video which discusses the impact of the CalEITC for families, and what actions they must take in order to receive the tax credit.

In 2018, California doubled down on yet ANOTHER expansion of the CAlEITC. This time, the expansion would include 18-24 year olds without dependents, and adults over 65 without dependents. However, this expansion brought a critical question to light. What about ITIN filers? When the CalEITC was created, it left out an entire community. Unfortunately, filers without Social Security Numbers - even if they paid their taxes - would not qualify. This unjust exclusion of immigrant ITIN filers for CalEITC, would lead to the next push for an expansion.

Headed by the California Immigrant Policy Center, the Children’s Defense Fund-CA, and United Ways of California; the CalEITC Coalition made ITINs inclusion its top priority. In February, 2019, Assemblymember Reyes (D-47) introduced AB 1593 to remove the exclusion of immigrant filers for CalEITC, allowing those with federally assigned ITINs or SSNs to benefit from the credit.

On June 7 of 2019, UWCA president and CEO Peter Mazo published an article on Medium stating, “Immigrant workers produce around one third of the state’s Gross Domestic Product and pay billions of dollars in payroll and income taxes — yet their contributions do not yield an equitable return.” Just a few short days later on June 10, 2019 the CalEITC Coalition released their response on the Final Budget budget negotiations, urging the removal of exclusions for immigrant workers who file with ITINs and more. Unfortunately, our cries fell on deaf ears. ( CalEITC Coalition Statement). 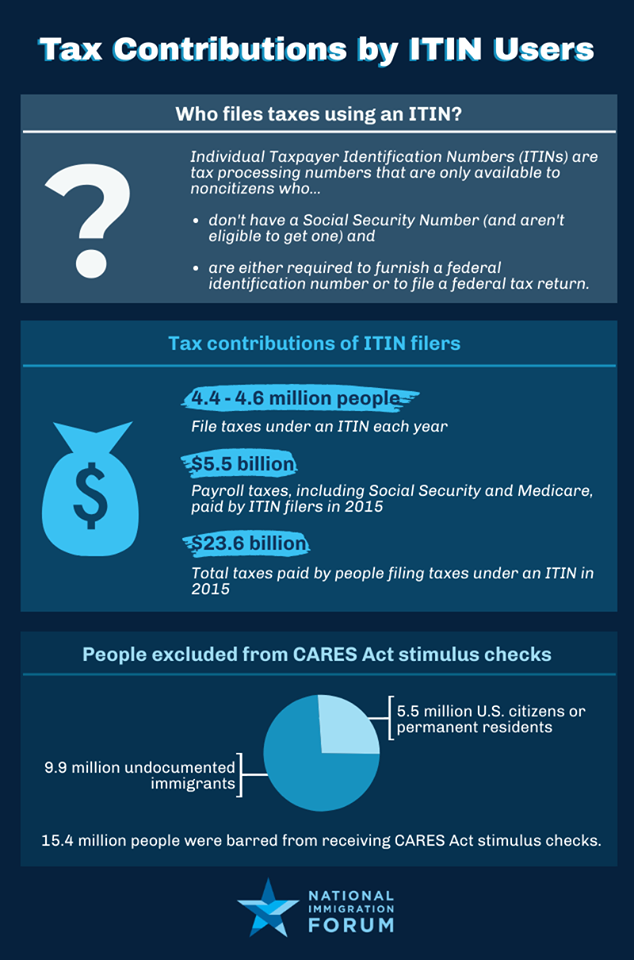 In November 2019 Alissa Anderson published a report with the CBPC that really started to make people listen. People who worked and earned the same amount had vastly different incomes just because of the number they use to file their taxes. Later that month, the Sacramento Bee here that undocumented families are truly essential, and interviewed Rosalba who made this statement about the tax credit, “This is about equality and recognizing everyone’s contribution.” Not long after joining the Coalition, Rosalba continued to be a prominent advocate for CalEITC by sharing her story far and wide. Her interview with the San Diego Tribune can be viewed here. 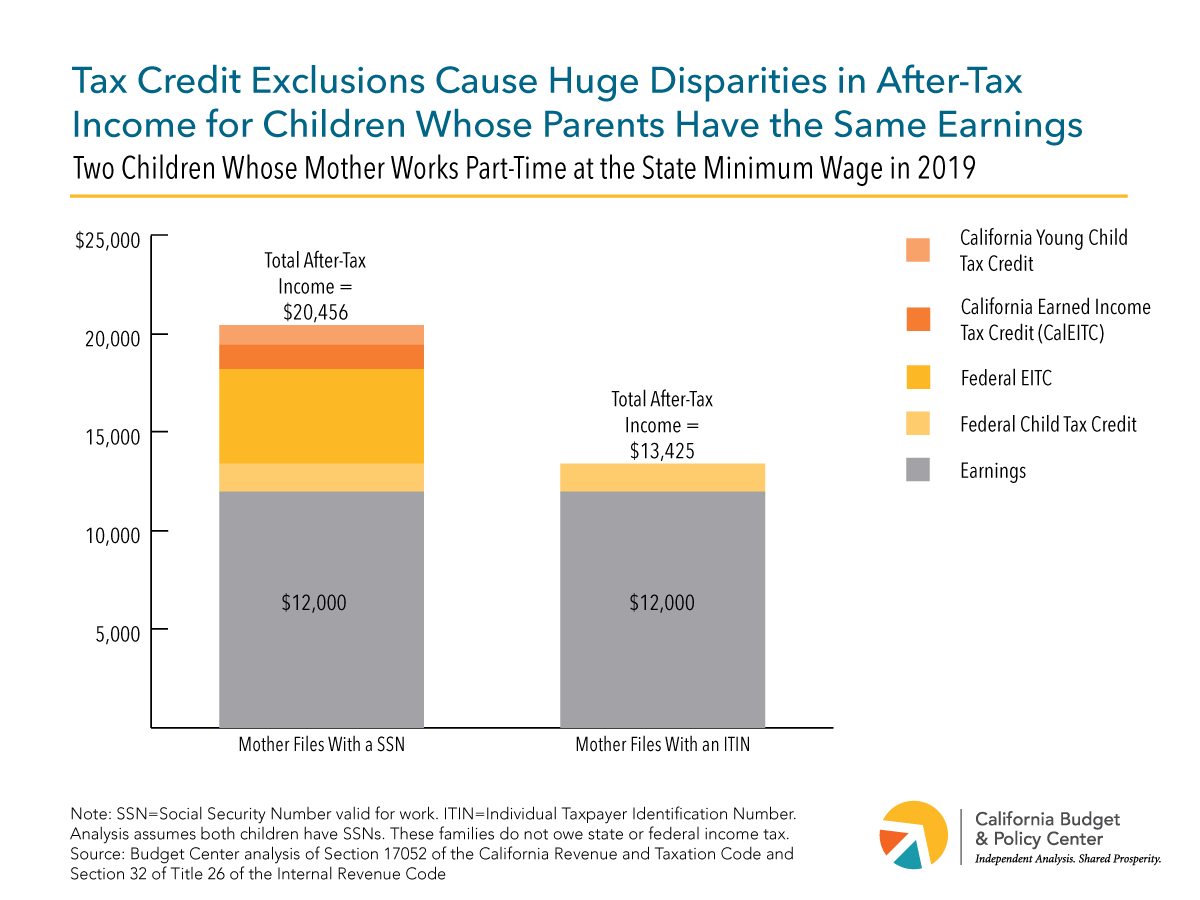 In January 2020, California GovernorGavin Newsom released his initial budget proposal for the year. Notably, there was a $1 billion investment in CalEITC that would reach 400,000 new families. Unfortunately, immigrant communities were still excluded. 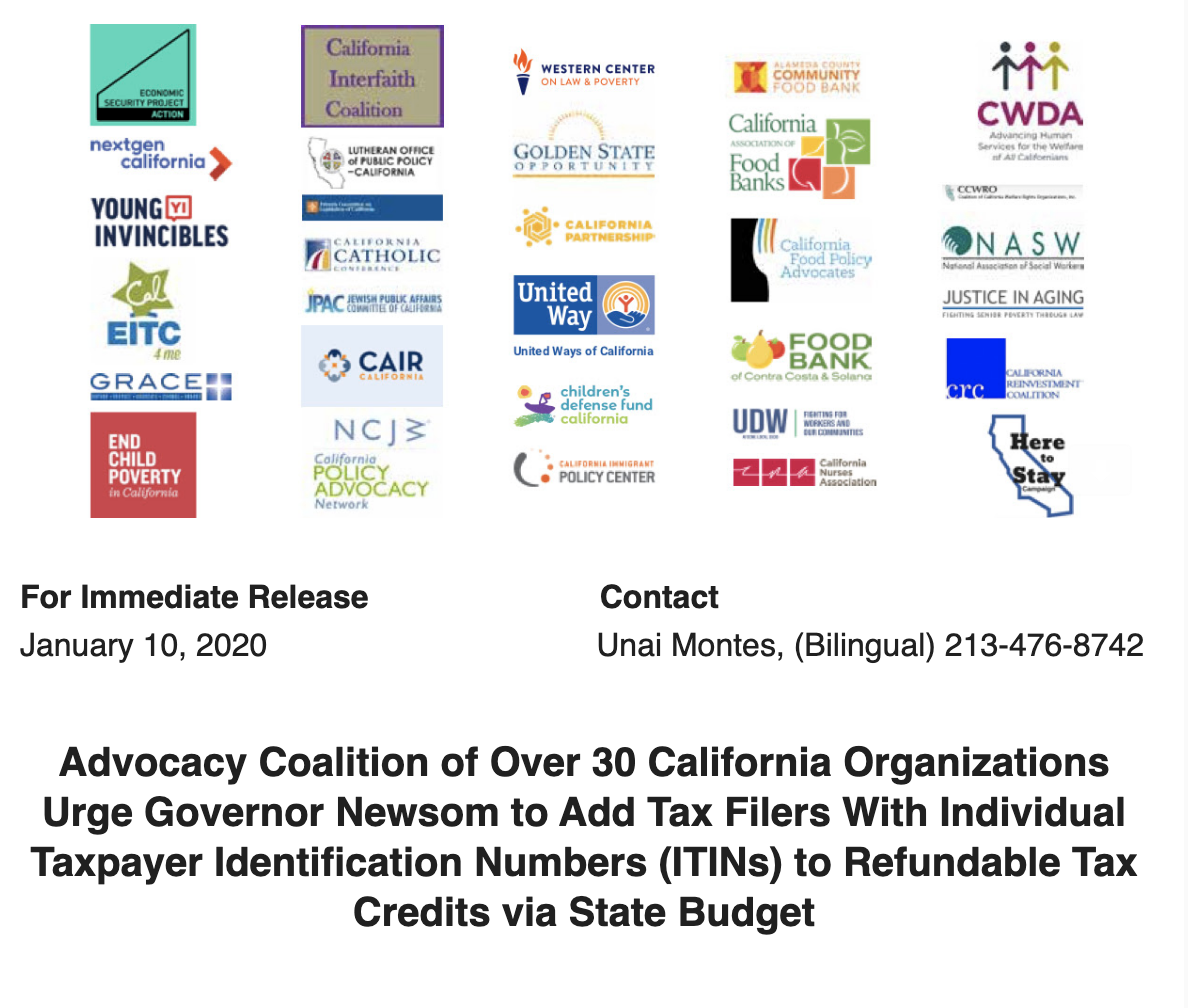 On February 28, 2020 our amazing author Assemblymember Reyes and CalEITC Coalition leader Sasha, wrote an op-ed for the SacBee for CalEITC Awareness week. 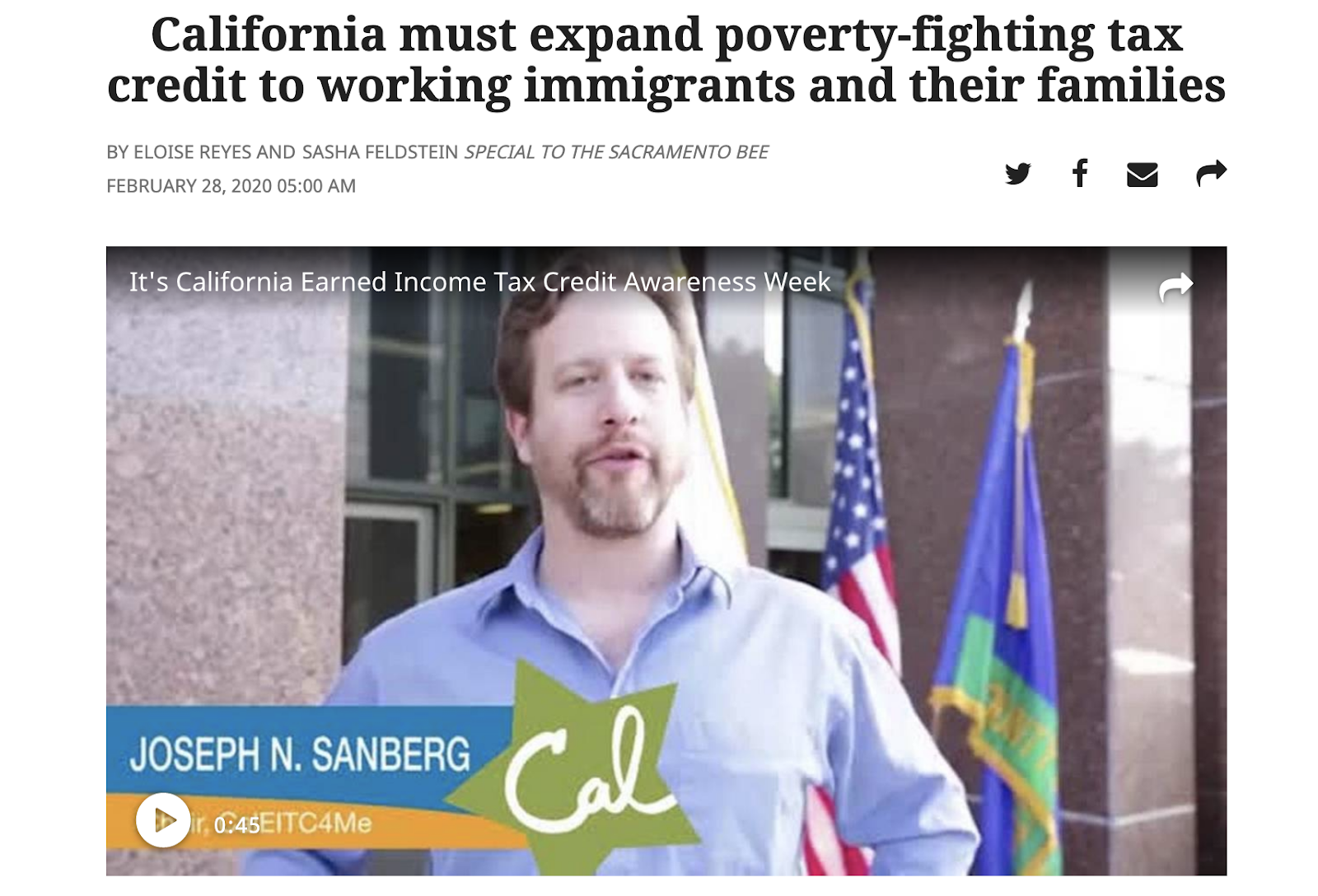 In early March, life in CA would change forever when Governor Newsom issued an executive order to shut down the state in response to the global COVID-19 pandemic. 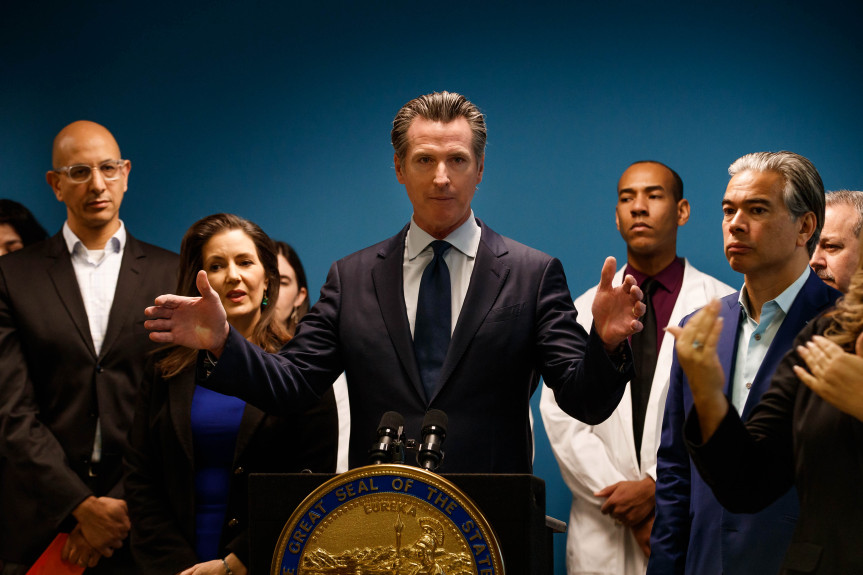 As the country remained shutdown, Congress negotiated the first stimulus package that would benefit most of the country but left out immigrant communities who were, and continue to be, disproportionately impacted by COVID-19 unemployment and cases. On March 19, VICE news picked up CA’s call for ITINs inclusion as the federal government continued to leave out immigrant communities in federal stimulus. Rosalba once again is one of the most prominent voices in this fight.

On March 30, our state legislature’s Latino Caucus submitted a letter to Governor Newsom. We made clear that COVID-19 relief and recovery efforts that did not include all impacted workers would fall short in achieving their desired outcomes. 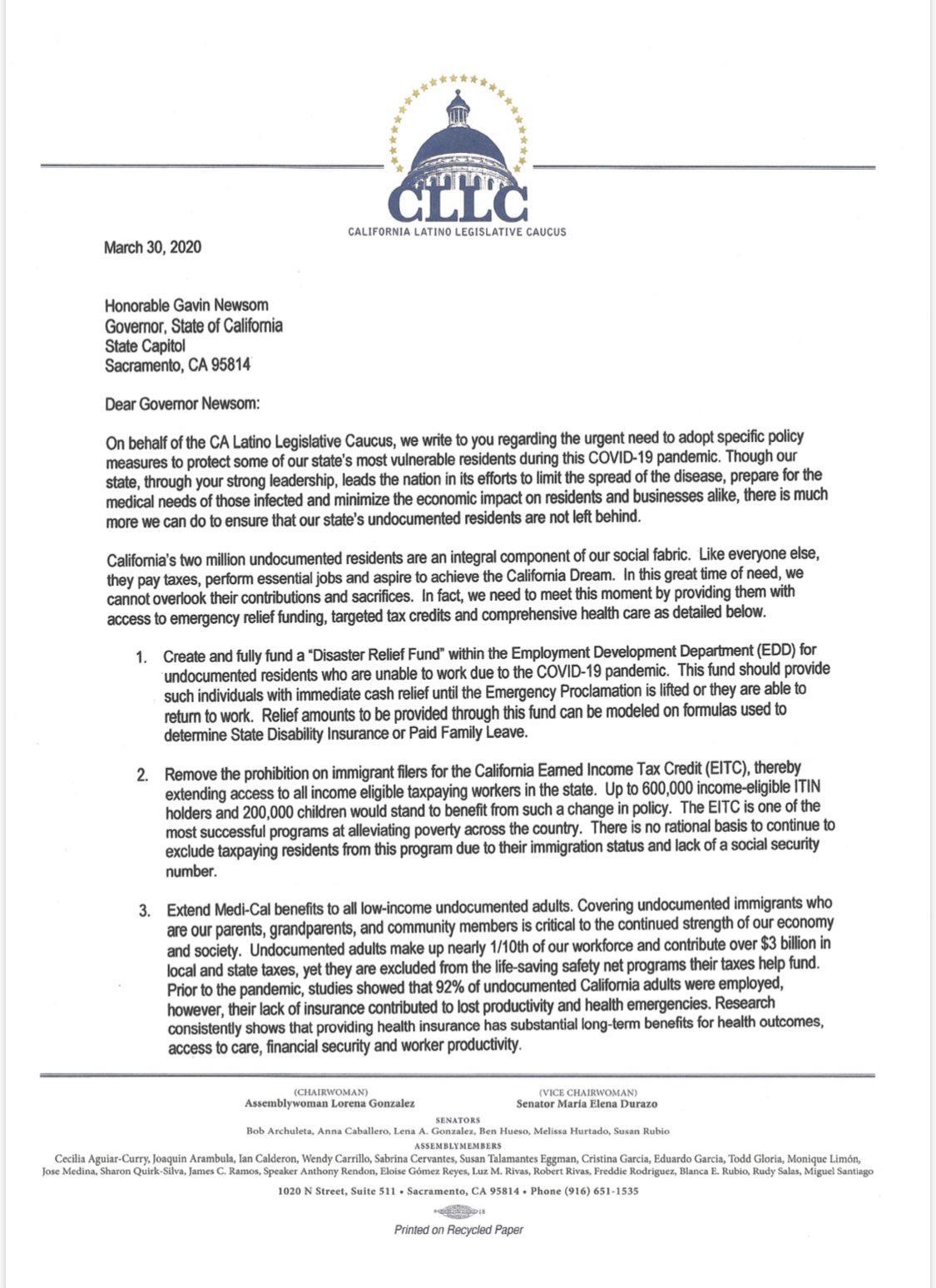 And we noted that one of the most effective mechanisms for maintaining financial security for low-income working Californians—particularly those with children—would be to make the California Earned Income Tax Credit (CalEITC) and Young Child Tax Credit (YCTC) available to all taxpayers, doing away with discriminatory practices harmful to each working Californian who files taxes with an Individual Taxpayer Identification Number, (ITIN) and to every local community denied the economic benefit of additional dollars in circulation.

In April 2020, the federal government officially passed the CARES Act to provide relief to the country. We were disappointed but not surprised when federal relief continued to exclude our immigrant community members. W/ federal exclusions, disparities got worse, and our partners mobilized quickly for #SafetyNet4All. If even one family member filed jointly with someone with an ITIN, the entire family would become ineligible for assistance from the CARES Act. One civil rights group called @MALDEF fought back and filed at least 6 lawsuits on behalf of families who were left out from the stimulus. 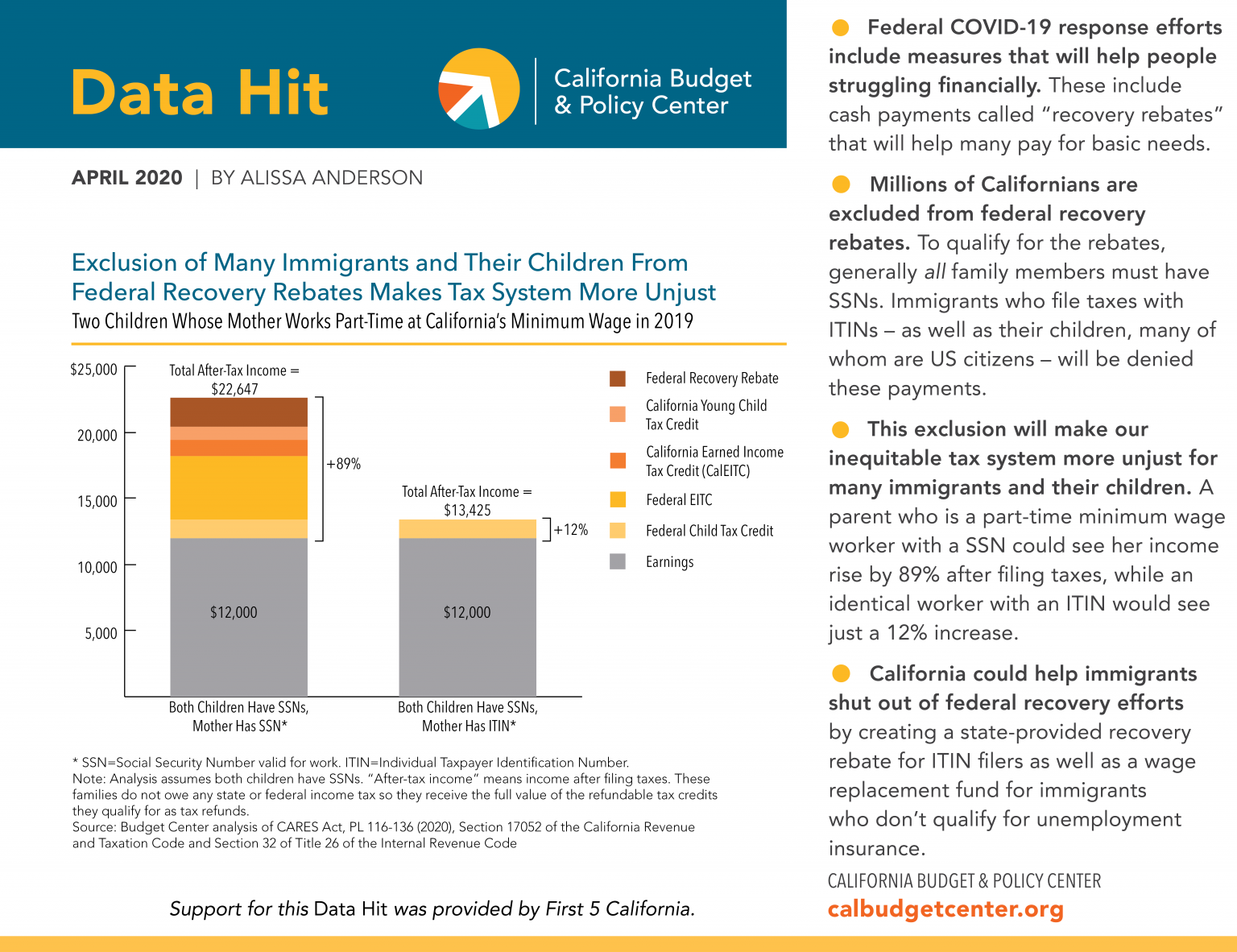 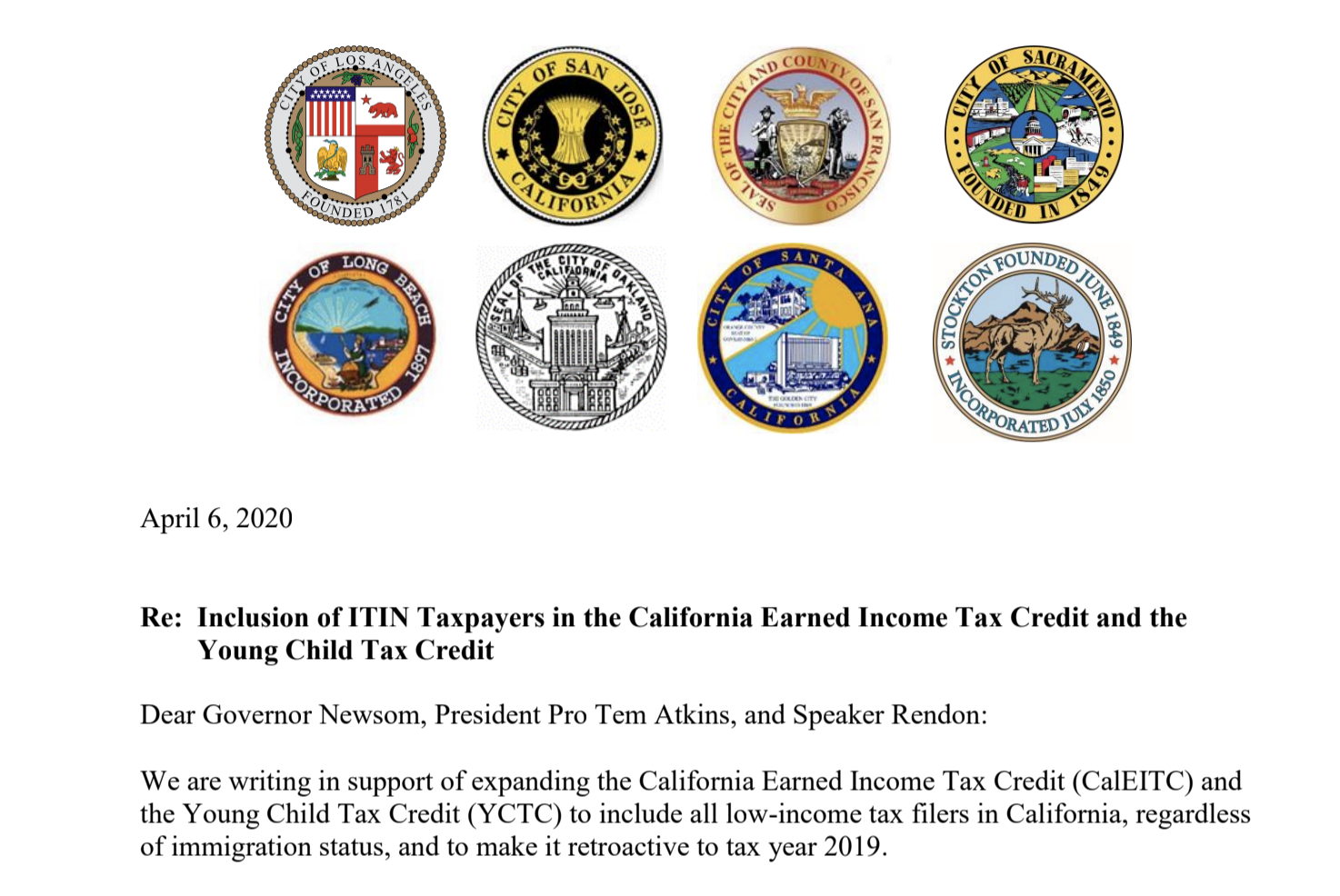 On April 14, we did a Digital Day of Action, where we met with dozens of legislators, including those from the offices of @SenToniAtkins @Rendon63rd @SenHJMitchell @AsmPhilTing. One day later, Governor Newsom announced the Disaster Relief Assistance for Immigrants (DRAI), one-time disaster relief assistance for undocumented Californians impacted by COVID-19 and who are ineligible for most other forms of pandemic assistance, including direct assistance under the CARES Act and unemployment insurance. 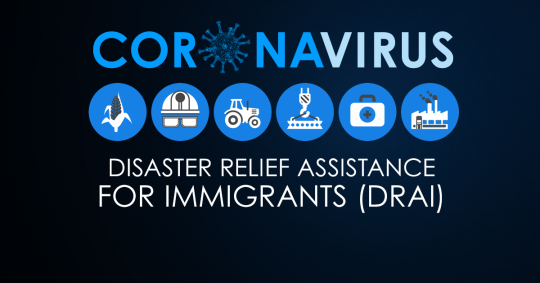 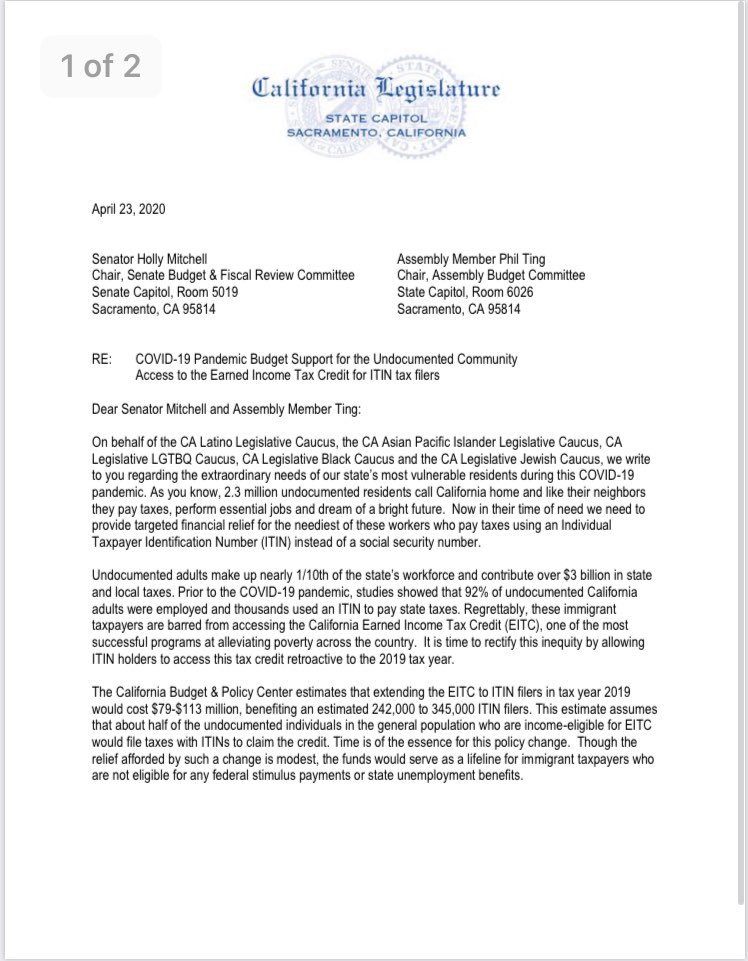 On May 4, @Shimica_G (CDF-CA) and @Prof_MPastor (USC) got their CalEITC Op-ed in @LADailyNews which explained why CA needed to support immigrants with expanded tax credit eligibility more than ever. On May 5, the Industrial Areas Foundation and affiliates gathered together for a Zoom call with over 1,200 participants to discuss the necessary inclusion of ITINS into CalEITC.

On May 14,, the Governor released his long-awaited May revise budget. Due to the COVID-19 pandemic, there were deep cuts across the board at a time where Californians, particularly our immigrant communities, needed more help than ever. Once again, their voices were unheard. 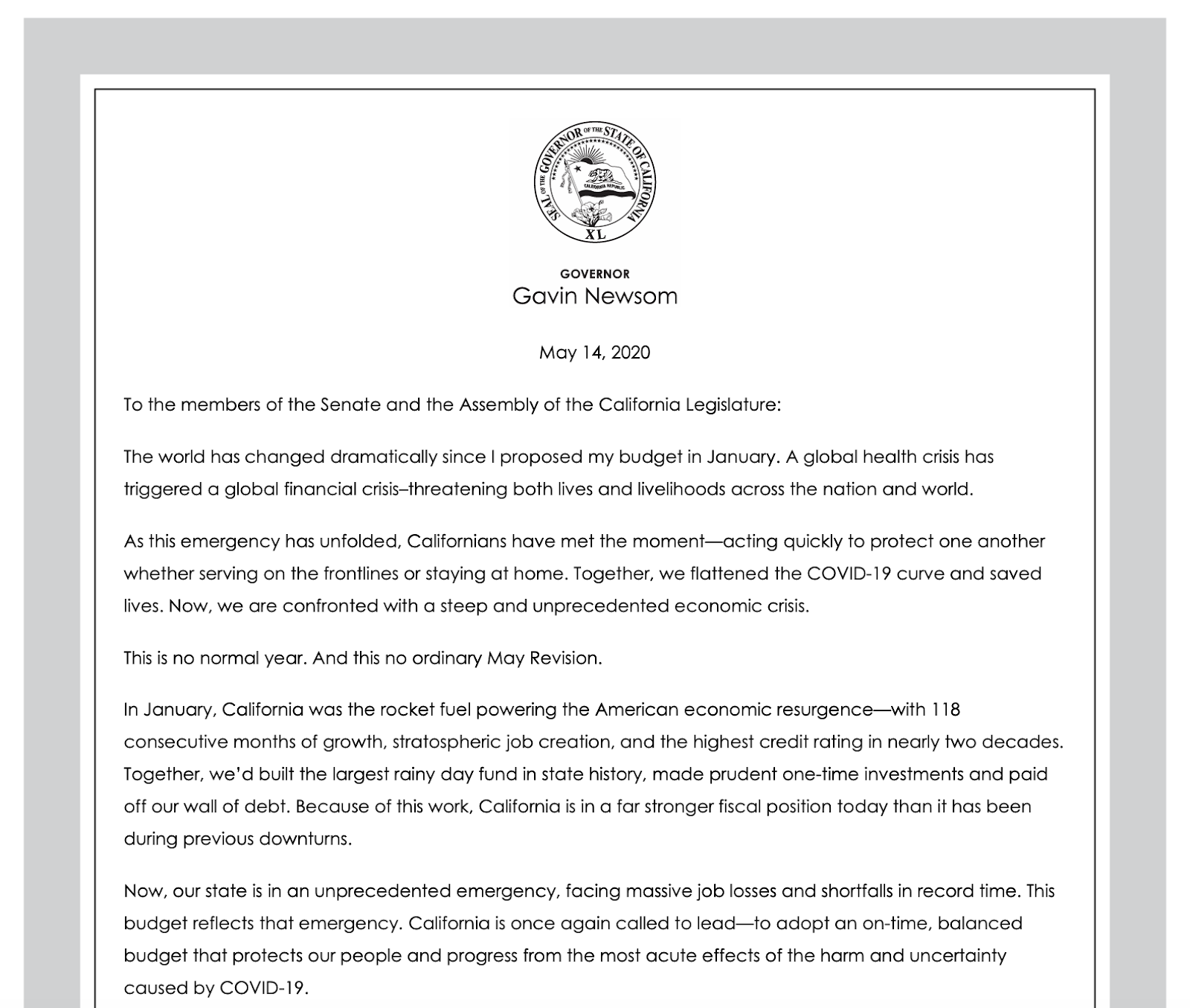 Through budget hearings, thousands of people wrote to Governor Newsom and to their legislators about why an inclusive CalEITC was so important to them and their communities. 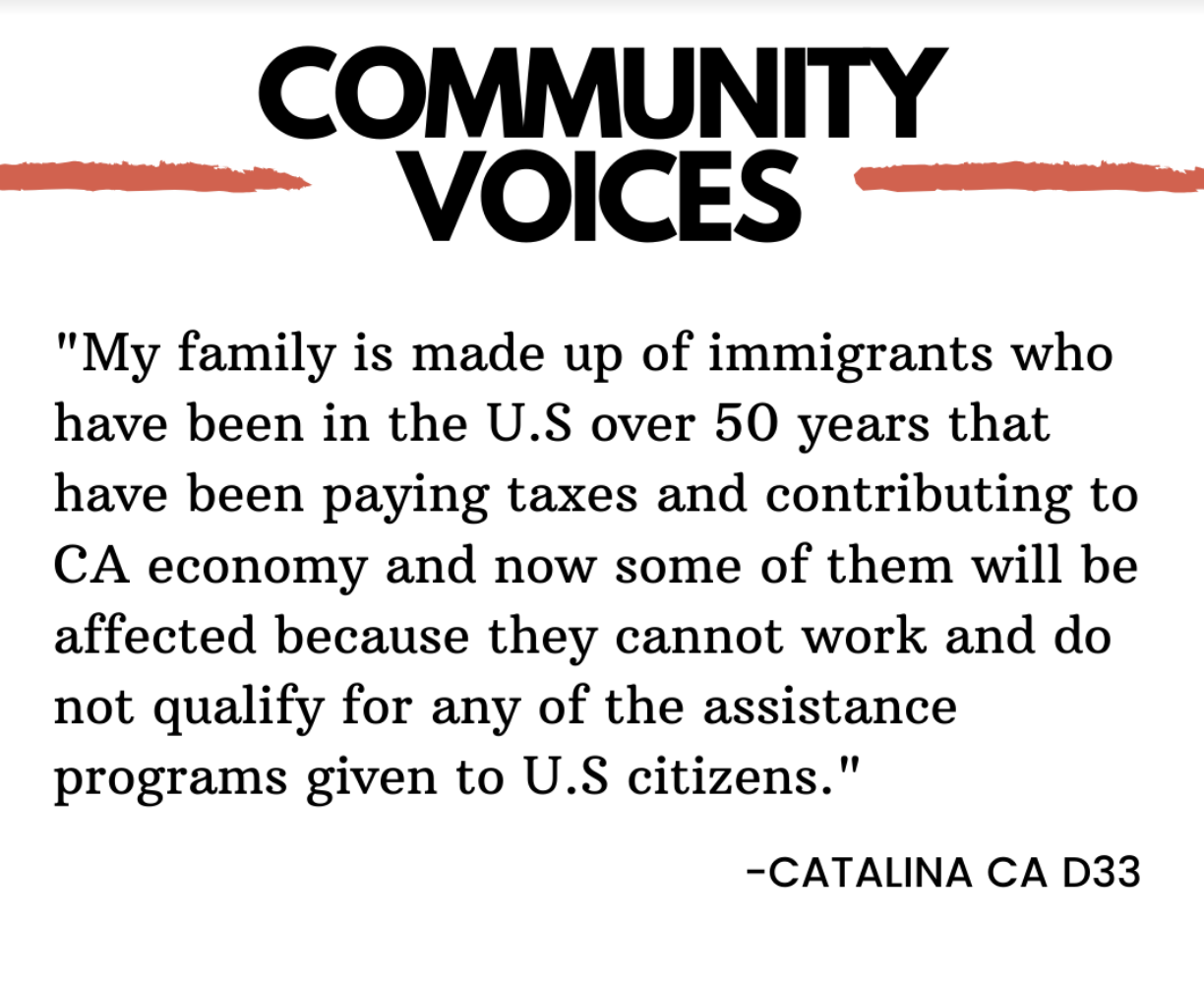 As part of May 11th’s #ImmigrantDay2020, advocates like @ic4ij utilized the hashtag #MakeItForAll to urge community members to take action and email the Governor directly to support the passing of CalEITC. Other social and economic justice organizations also stood up and participated in this day of action, including LA based @garmentworkercenter who fight for a better future for ALL Californians. 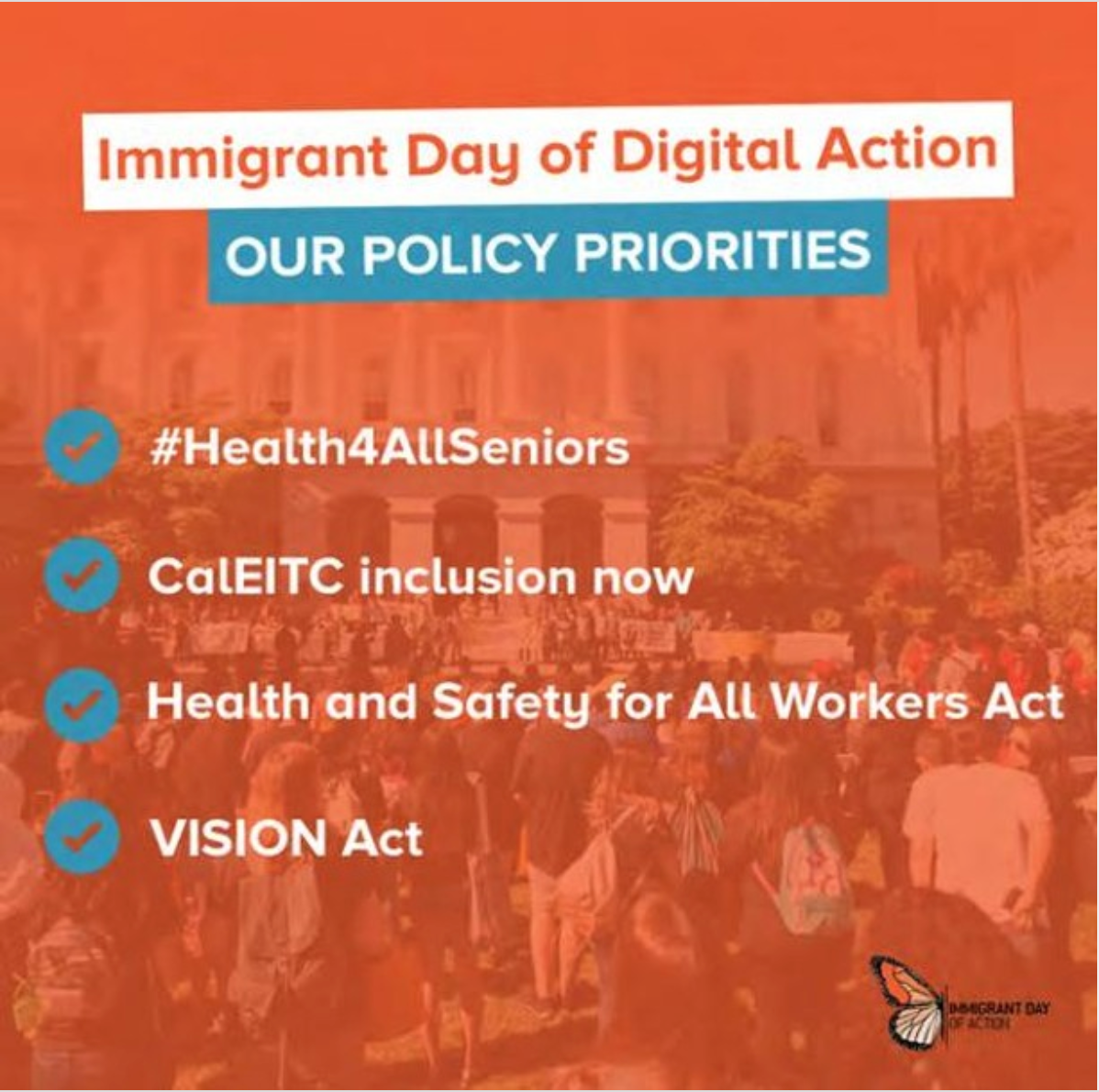 As more major news sources begin publishing stories about the importance of ITIN voices, our partners at @CHIRLA along with Rosalba urged readers to remain active. CHIRLA received over 630,000 calls in just 90 minutes in their effort to help undocumented families. After months of advocating amidst COVID-19, we were able to get the word out in a BIG way. The @LATimes picked up on our call and began to write on why an inclusive #CalEITC was so important. Soon after, the @sfchronicle also began writing about why using Social Security Numbers to determine who gets help and who doesn’t was the wrong way to have an equitable recovery.

Here the @CalBudgetCenter showed that 65% of immigrant workers excluded from the CalEITC are essential workers. COVID-19 exacerbated inequities, further highlighting the need for expanded CalEITC. 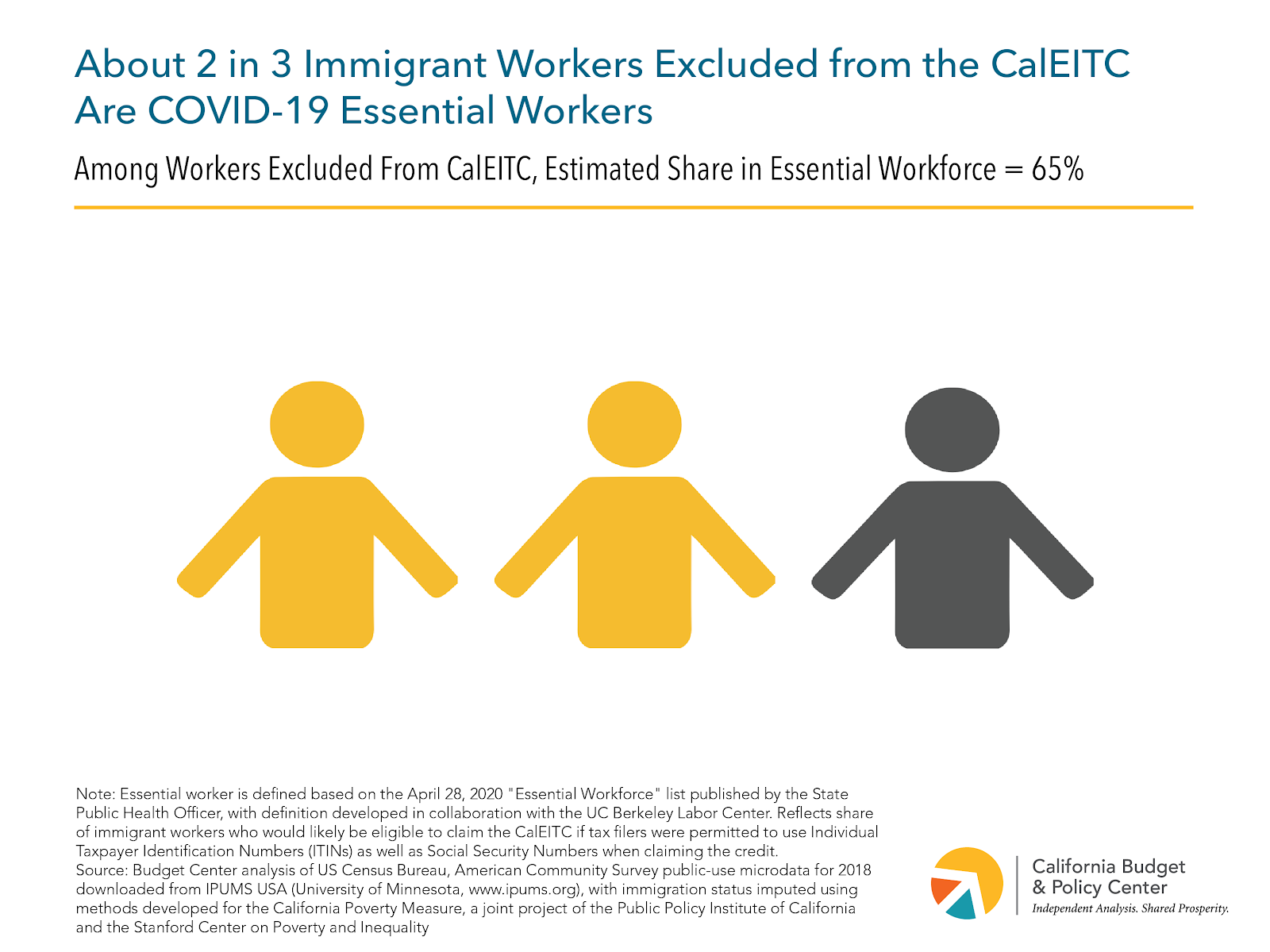 On June 22, the California Legislature & Governor Newsom agreed to a partial CalEITC expansion. This partial inclusion would reach approximately 32,000 to 46,000 immigrant tax filers and their families - families who are bearing a disproportionate share of COVID-19-related job losses.Unfortunately, even this expansion continued to leave out a large number (as many as 178,000 children) from receiving the necessary support they need during the pandemic and beyond. 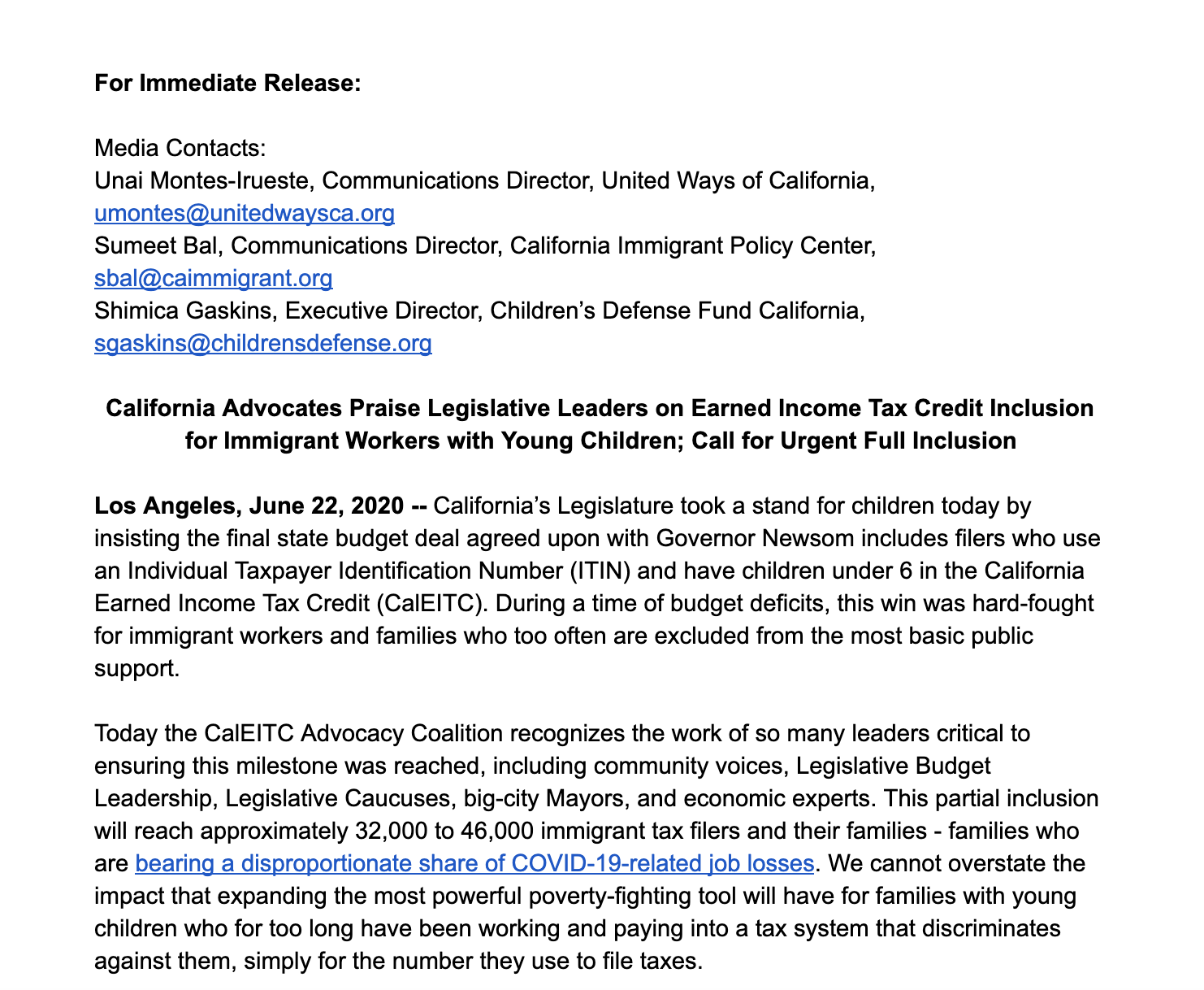 In response, we came together and targeted @GavinNewsom, @SenToniAtkins, and @Rendon63rd in a series of advocacy statements. We told our leaders to MakeItForAll and stop excluding immigrants from CalEITC. On August 7th, the @sdut mentions our Safety Net 4 All Coalition which had made great strides in the expansion of the tax credit. It also describes the harsh realities of families like Rosalba’s, who as a mother of four had seen her income reduced by half due to COVID.

After years of your tireless and deicated advocacy, on September 18, @GavinNewsom signed AB 1876 finally expanded the CalEITC to ALL tax filers, and ensured that thousands of undocumented families could be eligble for the aid they deserve! Now that ITIN filers will be eligible for this poverty fighting tool, there is still much work to be done. Outreach will be more important than ever to ensure that everyone who qualifies for this credit actually apply and receive the benefits.